It’s no secret that little kids are fascinated by the unknown. They like to explore every nook and cranny, which is why they find great interest in the mystery that is their nose.

We all know that kids love to put their fingers in their noses (eww), but do you know what other things they put in there?

So far, only one of my kiddos has attempted to bury a little treasure in his nose. It was a single Coco Puff, which luckily only went so far and was easily removed. Whew!

I asked my Facebook fans what crazy things their kids have stuck up their noses. Boy, did I get some funny responses!! Here’s the list of objects found in noses:

What Happens When Kids Stick Things in Their Noses?

Some of my fans went into great detail of what happened when their kiddos stuck objects in their noses. While they may be giggle-worthy, they could have been serious!

My sister stuck a cherry pit up her nose. No one believed her. My parents took her to the ER and no one could find anything. Seven years later she sneezed and a cherry pit came flying out! -Lorrie

My child went through that phase recently. He stuck a toy spaghetti noodle from a game up there and gave himself a nose bleed. He’s also stuck crayons, a mini ink stamper, and popcorn in his nose, but they all came right out without any scary blood. He’s so fast too! One minute we’re playing a game, the next his hand is to his face and there’s something in his nose. – Dianne

My son stuck 4 corn kernels up his nose when he was 2, we got 2 our and thought that was it. He ended up getting a really bad nose cold and 3 days latter sneezed out the other 2. His “cold” was gone by the next day. -Brandi

I remember my brother putting a bead up his nose. We called in a neighbor to help. He rolled up a tissue and tickled his opposite nostril and made him sneeze it out. -Yetty

I apparently stuck an orange Flinstone vitamin up my nose when I was 4 or 5. Barney was so far up there I almost had to go to the ER but my Dad somehow got it out of there. That was probably the last time I got to pick my own vitamin. LoL! – Melinda

Well, my nephew got bored in school one day. He fished a rock out of the bottom of his shoe and stuffed it up his nose. My sister had to go get him and take him to the Dr. When asked why!? He said simply, “was just bored, mom.” -Chris

My daughter stuck York Peppermint Patty Minis up her nose after watching an ICarly episode where they stuck blueberries in their noses. The patties made her eyes water terrible and for a lack of anyting else to do, I put her in a nice warm shower so the steam could melt the candies. -Angie

My niece stuck a piece of foam up her nose and no one knew. The skin in her nose started growing over it, and she started getting all these symptoms no one could explain. They seriously started testing her for all these diseases. Then an ENT specialist happened to look up her nose and saw a little black spot and said “Hmmm what’s that? That’s not supposed to be there” and grabbed a tweezers and puled it out. Problem solved! A week later she was trying to stick beads up her nose… -Michele

When my oldest niece was about 2 or 3 her nose kept bleeding so my sister took her to the doctor. He did surgery to remove whatever. It was a piece of cardboard that you find in the cap of medicine. Come to find out their friends kids and her were playing doctor she was the youngest and the patient. They folded it up and stuck it up her nose. -Janette

Feathers. Lots of feathers. From pillows. Any pillow. We even had to have a procedure to remove those darn feathers. -Angelika

I didn’t understand why the orange crayon didn’t smell like oranges. So I thought I needed a closer sniff. Yup– my dad called my mom panicking. I had a piece or orange crayon as far as could be– I was, maybe 2. -Jennifer

My daughter stuck a bean from an art project up her nose. She told her dad right after (9 in the morning) and he did nothing. I thought she was catching a cold because her nose kept running at about 5. Got the story out of her we had to go to the emergency room. Less than 10 hours later it smelled and was starting to sprout. The doctor was her regular pediatrician and jokingly asked if we wanted it for her baby book. -Theresa

Symptoms to Look For

There will be times when you just don’t know if or when a child has stuck something up his or her nose. Be on the lookout for these symptoms, especially if there isn’t any illness or any other issue:

These could be signs that something is stuck inside your child’s nose. It’s important to keep these in mind, especially if you have a toddler. Toddlers don’t always have the ability to tell us what’s wrong! 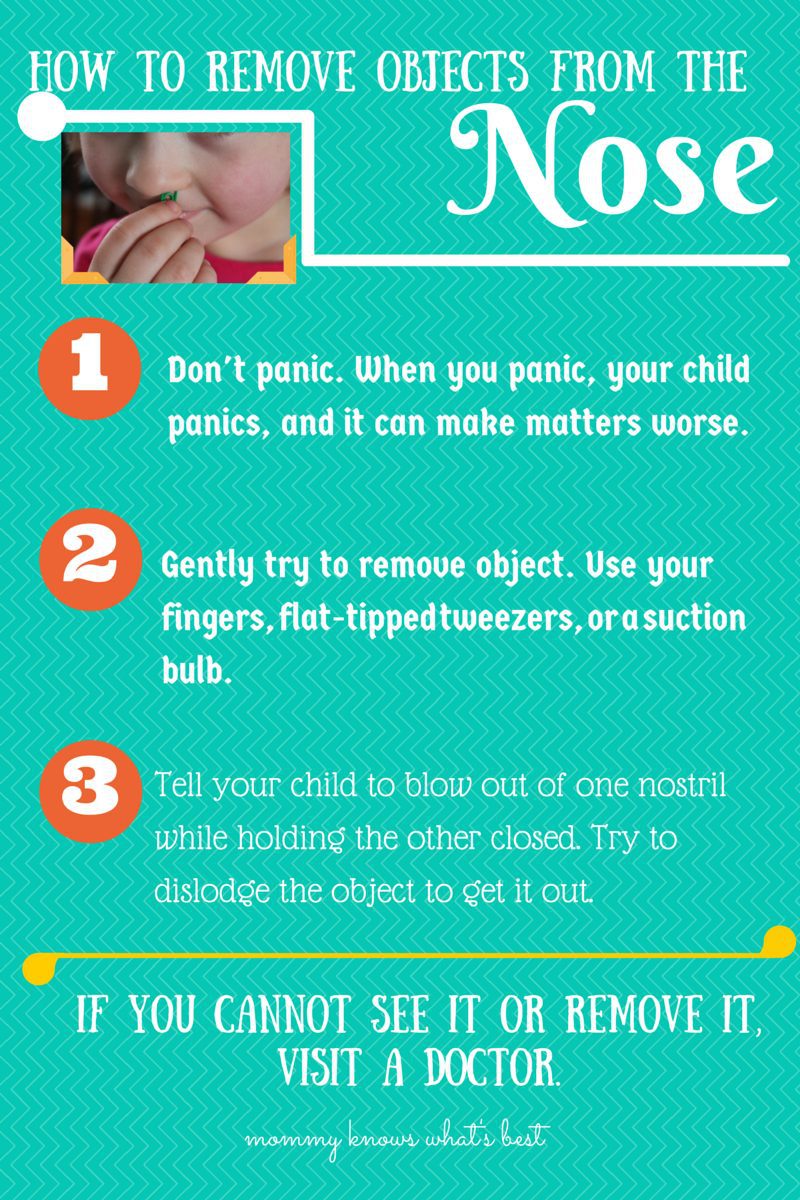 First things first: don’t panic and start yelling. If you panic and get upset in front of your child, he or she is likely to panic. He or she may also start crying, which is going to make it much harder for you to figure out what is going on.

You also don’t want your child to inhale too deeply when crying. If your child inhales too deeply, the object in the nose could get stuck even more or go down into the lungs.

If you can see the object, gently try to remove it with your fingers or flat-tipped tweezers. You could also try to use a suction bulb to suck out the object. Be careful not to push the object further up into the nose.

Another method you could try is holding one nostril closed while the child blows air out of the other nostril to try to dislodge the object.
If you cannot get the object or you cannot see it, take your child to the doctor. Don’t wait too long as infection could occur or the object could go into the lungs.

And when all is said and done, wipe your child’s nose gently with Boogie Wipes® saline nose wipes (click here for a coupon) while reminding them that it isn’t a good idea to stick things up their little noses!

Marissa is the writer behind Mommy Knows What’s Best. Her goal is to help make your parenting life a breeze as she shares her own experiences with her three kiddos, who keep her on her toes at all times. In sharing what works best for her family, she hopes that you can find what works best for your family.

Sign up for our newsletter and get 25% off + free shipping on your first purchase of $25 or more!